How to Avoid the Flu 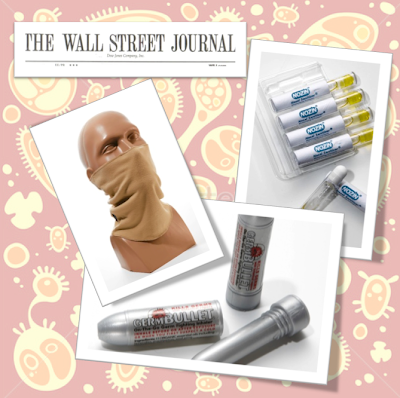 Infectious diseases are most often spread through contact—talking, kissing or touching an infected person's hands or an item the person has touched, such as a doorknob, says Philip M. Tierno, clinical professor of microbiology and pathology at New York University School of Medicine in New York. Even being within the vicinity of a sneeze can infect a person. Washing your hands and using alcohol-based hand sanitizer helps reduce the chances of getting sick and passing illness to others, Dr. Tierno says.
Extending this idea to the nose is a product called Nozin Nasal Sanitizer by Global Life Technologies Corp. of Chevy Chase, Md. Nozin consists of a 62% alcohol antiseptic and moisturizers in a special formulation designed to last eight hours. It is applied around the nostrils and just inside. It comes in either in pre-measured doses with an applicator, at a cost of about $9 to $10 for 10 doses, or in a bottle with cotton swabs, which costs about $13 for 60 doses.
The product's package says it kills "99.9% of germs" and "helps reduce the risk of infection." Pathogens killed include rhinovirus, which causes colds, and Influenza A, says company President John Willimann, adding that the company doesn't claim its product prevents those maladies. "It's like a hand sanitizer for the nose," he says.
Company tests found that Nozin kills nearly 100% of various types of bacteria that cause illnesses—including strep throat, colds and Influenza A—within a minute. In a separate study of 30 healthy humans, a single application of Nozin reduced the number of bacteria in the nostril by 93% immediately and 77% after eight hours. The germ count for the control group, to which sterile water was applied, didn't decrease.
GermBullet is a blend of 11 oils—including eucalyptus, lavender and pine—in a bullet-shaped inhaler. The package recommends inhaling the vapor three times in each nostril "before or after exposure or when you first suspect a cold." Sold by Flu & Cold Defense LLC in Boca Raton, Fla., GermBullet costs $7.50 and is good for 40 applications, the company says.
The GermBullet blend of oils has been shown in laboratory tests to kill bacteria and viruses when mixed with them directly. The company says it believes it kills germs when inhaled as a vapor and has begun tests to verify that.
It isn't clear if Nozin or GermBullet will prevent germs from traveling to the back of the nose, where infections generally take root, scientists say. Even if they do kill pathogens in the nose, germs can still enter through the eyes and mouth, Dr. Tierno says.
A $20 scarf and other antibacterial winter gear by GermBana Inc. of Wayzata, Minn., are "designed to be worn when you have a cold or are subject to others who may be sick," according to the company website. The idea is to use the scarf to cover your mouth and nose when around others who may be ill, or to sneeze into it so pathogens will be killed instead of lingering to infect others, the site recommends. GermBana's product line includes a face gator and gloves.
In a company-funded test, GermBana's fabric was contaminated with bacteria and, when tested 24 hours later, the number of bacteria had decreased by 99.92%. Scientists say GermBana's scarf—or any scarf—would likely reduce exposure to pathogens if it covers the nose and mouth while around sick people.
To prove the products do any good, it would be necessary to test each one against a placebo during several months in a human study to see if its use reduced the incidence of illness, says infectious-disease specialist J. Owen Hendley, professor of pediatrics at the University of Virginia Health System in Charlottesville, Va. Even if the products effectively kill the germs, that doesn't mean they will prevent illness, he says.
If you are really concerned, scientists say, simply cover your face and mouth. Scientific data suggests face masks may help prevent the spread of flu and other illnesses, adds William Schaffner, chair of the department of preventive medicine at Vanderbilt University School of Medicine in Nashville. But most people take them off because they are uncomfortable, or wear them only over the mouth, leaving the nose exposed, says Dr. Schaffner.
Ritu Goel, a Pawtucket, R.I. ear, nose and throat specialist who has no financial link to the company, says she uses Nozin when traveling and when seeing coughing and sneezing patients. She recommends it to patients who regularly get winter sinus infections. The alcohol prevents germs from "festering in the nose," she says.