Rising to the Top with Sara Blakely 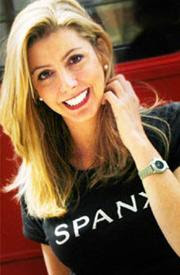 This week I had the surreal and exciting opportunity to meet the founder of Spanx, Sara Blakely. Seven years ago, she was aggravated by the lack of hosiery options that existed in the market, so she acted upon her frustration. By filling this void, she created a multi-million dollar undergarment company.

Early Monday morning, I paid a visit to Fashion Week’s Spanx Suite to learn about their new launches. This innovative company consistently creates products to help women look their best.

So, up in the suite Fox 5 conducted an interview with Sara about company and how it performs. She revealed Spanx had over $100,000,000 in retail sales in 2007 and plans to increase this number in the future. During the interview, she was surrounded by people, and as soon as it concluded she was whisked downstairs for another meeting.

Around that time I ventured downstairs to take a break and grab some food. Little did I know that as the elevator doors closed, Fate was about to open an opportunity to meet one of the most influential business women of our time.

After my snack, I braved the abysmal weather back to the Bryant Park Hotel to complete my duties in the suite. I dragged my soggy self into the elevator, and just as the door closed, in walked my business hero, Sara Blakely and we began our 25 floor ascent to the Spanx Suite.

For the first few moments of our ride, I deliberated whether or not to verbalize my excitement to Sara, but considered how my boldness might be considered unprofessional. Then I had an epiphany, hello! this was my chance to get some face time with the woman who single-handedly changed the way the female gender look and feel in their clothes!

I opened my mouth and the words started falling out. I told her how I thought she was an inspiration to women everywhere and a genius businesswoman. I told her I that her creativity and energy had motivated me to trust my instincts and not to give up on my goals.

While she was probably distracted, and must get bombarded like that all the time, her response was somewhat robotic as she told me my enthusiasm would one day find me the success I sought. Despite her preoccupation, I was thrilled to spend time with Sara.

So let me lay down the bottom line: when faced with an opportunity, don’t let fear hold you back. One day I may develop an ideas into a multimillion dollar company, and when that day comes, I will look back and thank my lucky stars that I trusted my instinct and spoke up.

Email ThisBlogThis!Share to TwitterShare to FacebookShare to Pinterest
Labels: Consider Yourself a Celebrity