During Fashion Week, our world turned upside - not just because our brain went mushy waiting for shows to begin or because we've solely sustained on Lara Bars and Zico Coconut Water (and other backstage booty) for seven straight days. Nor was it the over-the-top Western inspired peplums (pictured right).
What rocked our world was beautiful nails. Our friends at OPI shared the behind the scenes scoop on the A-listers and models who sported their nail trends... 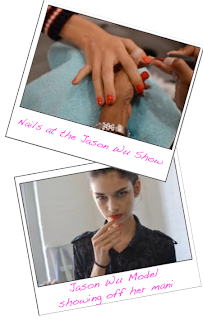