How to Make a Makeup Impact on the Runway

Before Katniss Everdeen dominated the Hunger Games, Battle Royale, a Japanese thriller held the prize for the most controversial film about a government forcing children to compete in deadly competition. This shocking film, as well as the military, was the inspiration behind the Spring/Summer 2013 Band of Outsiders collection. 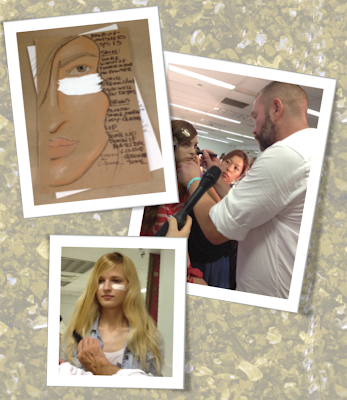 We went behind the scenes to catch up with Shiseido Artistic Director, Dick Page,  to learn more about this unexpected makeup motif.  Page revealed his idea for the feral war paint was spurred by the designer’s abstract designs.  He wanted to complement the unique textures and military influences in the clothes by keeping a neutral mood and adding a dramatic slash under the eye.

He revealed that he kept the face simple without adding any foundation or a specific eye or lip, but added personality by creating a stand-out white “gash” with Shiseido Concealer.

He also accentuated the brows by adding weight with Shiseido Shimmering Cream Eye Color in Sable. 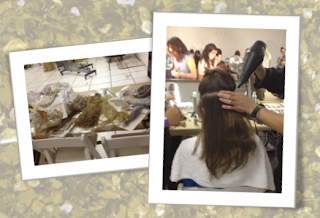 Across the way Didier Malige used Aveda to make some waves.  He piled on the extensions to create soft, loose volume.  The roots were fortified with Volumizing Tonic to lift the follicle and add dimension to the base.  Then, the dry locks were curled around a double barrel iron to make a gentle "s" shape.  Before setting the style, Malige parted the front into a seductive swoop that covered each model's right eye.  He finalized the 'do with Pure Abundance Style Prep for an overall effect that according to Malige was "more tension than aggression."

Ready for the runway and may the odds be ever in your favor.